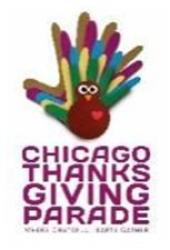 The award-winning Chicago Thanksgiving Parade (‘Where grateful hearts gather’) returns on Thursday, November 24, 2022, from 8 a.m. to 11 a.m. CT, traveling up Chicago's legendary State Street from Ida B. Wells Drive to Randolph Street. This free family tradition joyfully showcases the best talent from across the nation, including marching bands, festive floats, staged performances, equestrian units, cultural performance troupes, and inflatables, all led by celebrity hosts and a special visitor from the North Pole—offering a celebration with jolly sights and sounds for attendees of all ages.

New for '22, CW26 will broadcast the entire Parade, airing live on WCIU, Channel 26.1, XFINITY 183|1026, RCN 6/606, WOW 10/207, Dish 26, Direct TV 26, Spectrum Charter 22/616 and U-Verse 10/1010. This year's Parade will be co-hosted by actors Jen Lilley (Days of Our Lives, Royally Wrapped for Christmas) and Jesse Hutch (Batwoman, Dream Wedding), soon to co-star in the Great American Family network's B&B Merry, one of the holiday's most anticipated movies, premiering Sunday, December 4, 2022.  For those seeking an extra-special experience, the Chicago Thanksgiving Parade offers VIP seating, providing the best view of the Parade and the opportunity to enjoy the staged-for-TV performances right before their eyes, in addition to the forward-motion parade. Tickets for VIP access to the Chicago Thanksgiving Parade are $60 and available for purchase at www.chicagothanksgivingparade.com.

"CW26 is proud to be the new home of the Chicago Thanksgiving Parade. Our partnership reinforces our commitment to supporting Chicago and creating lasting holiday memories for our viewers," said Steven Farber, Weigel Broadcasting Senior Vice President of Operations.

Jen Lilley expresses her excitement for hosting: "I am absolutely thrilled to be co-hosting the Chicago Thanksgiving Parade! As an ambassador for the ‘Christmas Is Not Cancelled’ non-profit, which raises funds for families across the nation to receive Christmas gifts, I’m grateful for this opportunity to help spread the word and to spread joy for families and children in need!" Jesse Hutch shares the sentiment: "I look forward to supporting the amazing people of Chicago and hosting the Thanksgiving Parade with Jen. To say that I am thankful is not only true but also fitting for the day of celebration and reflection."

Attracting hundreds of thousands of spectators each year, the 2022 Chicago Thanksgiving Parade features an eclectic roster of festive participants from across the city and the globe, including:

For more information and updates about the Chicago Thanksgiving Parade, visit www.chicagothanksgivingparade.com.

Originally called the Christmas Caravan in the 1930s, the Parade, now in its 88th year, was created in 1934 to help lift the spirits of residents suffering through the Great Depression. Since then, it has developed into a full-scale spectacle that celebrates the holiday season. What once started as an attempt to boost Chicago's economy, has evolved into a cherished holiday tradition for Americans across the country. Over sixteen different cultures will share their enriched traditions with Chicago's Parade this Thanksgiving morning. The sights on State Street give the audience a chance to travel the world and embrace other traditions, all without leaving downtown Chicago. Follow Chicago's Thanksgiving Parade on Facebook, Instagram and Twitter.